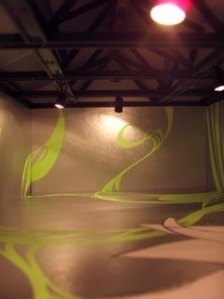 Jasiura’s current installation in PGP’s Olga Korper Edition is an experiment with patterns and more traditional motifs. She is interested in wall coverings that were designed to encompass an entire space, more specifically referencing Baroque and New Colonial styles.  By zooming into a portion of the design, Jasiura is using elements of scale, line weight, colour and texture to overwhelm the gallery space and take the viewer away from a white wall experience and into focusing on every corner of the room.